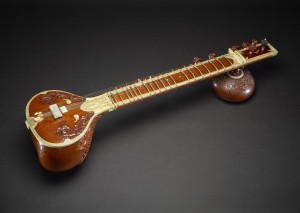 Sitar is perhaps the most popular stringed instrument in India. Sitar has also become synonymous with India and Indian culture throughout the world.

Sitar is perhaps the most popular stringed instrument in India. Sitar has also become synonymous with India and Indian culture throughout the world. Interestingly, the word “Sitar” is Persian (Iranian) in origin, meaning three strings (seh – three and tar – string). The Persian setar, similar to the Turkish saz, is a long thin-necked lute with a small wooden body.

The origin of the sitar is shrouded in controversy. Oral tradition states that Amir Khusrau, a poet in the court of Allaudin Khilji (1296-1315), was the inventor of the instrument.

In its contemporary form, the sitar is constructed of wood (teak) mahogany or (tun)), gourd, metal, and bone. The wooden neck is around 35 inches long, 3.5 inches wide, and slightly troughed, terminating at one large resonating chamber made of gourd. It is not uncommon for a second resonating gourd to be attached at the other end of the neck on the dorsal side. On the neck rest about twenty scalloped, movable, metal frets tied by silk or nylon string. Sitars with fixed frets are less popular in present times.

The sitar consists of two layers of strings made of steel, brass, and copper. The bottom layer of approximately 13 steel strings are referred to as taraf (Persian for excitement or joy) and rest on a small one inch long bone bridge, which is a fraction of an inch high. These strings are tuned to the notes of the raag being performed and resonate when the strings on the main (top) bridge are plucked. The top layer of seven strings, used to create the melody and drone, rest between three bridges on one end of the neck and a main bridge that rests on the gourd section. Two of these three bridges anchor two of the three chikari (drone) strings that serve to extend notes and/or punctuate the rhythm. The remaining five strings lie on a bridge that spans the width of the neck. All seven strings converge, in a parallel manner, on the main bridge that sits on the gourd section. The main bridge is about three inches long, and one inch in both height and width. Made of antelope horn (and optionally a layer of wood on the surface), the bridge’s slightly curved shape contributes to the tonal quality of the instrument, including the distinctive buzzing sound. Over time, the melodic strings cut into the bridge and require it to be reshaped. Sometimes two hooks are attached to the frets to lower the height of two bass strings of the instrument so that they do not undermine the playing of jhala or other fast passages.